First, I want to say that my pup is doing great. She got the staples taken out of her side, and the vet said it looked like everything healed perfectly! yay! And my neighbor, was very apologetic about her dog (a chow, which I've heard often bite with no warning) and paid for our vet charges.

We're happy, and my Indy puppy is even happier to go on walks again. But then yesterday, we got some bad news. My dear hubby Captain Jax had applied for a promotion, and was a shoo-in. As in the manager deciding who got the position had told him previously (about 2 months ago) that the next store (He is an assistant manager at Gamestop) would be his. He'd finally be a manager, after 3 years of waiting and working for it!!!

And then she gave it to someone else. He's pretty bummed about it (as am I) since she told him it would be his. *sigh* that's life for ya ain't it? 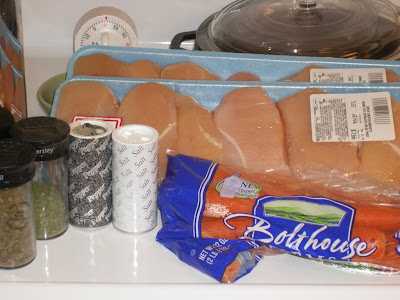 We're making a basic chicken mix, which has a lot of potential. Here's what you'll need: 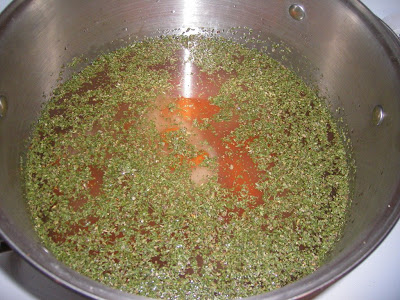 Throw everything into a pot of cold water (4 qts to be exact). Let it start boiling, then turn it down and simmer it for about an hour, until the chicken's done. 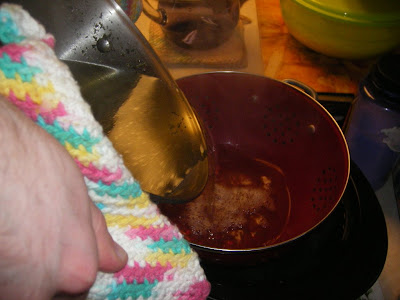 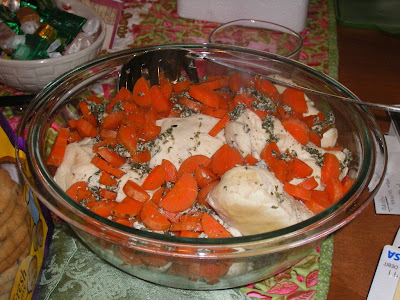 shred up your chicken, and mix everything together nicely. 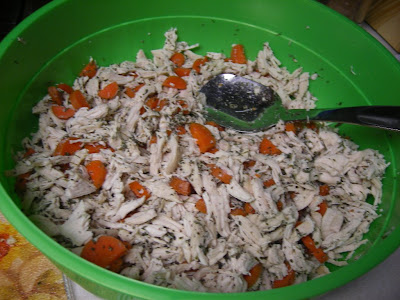 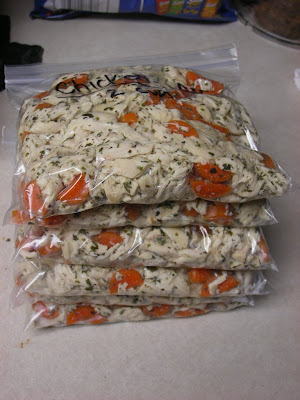 Divide the mixture into 2 cups per bag, since that's the amount that's needed for most recipes. Label it and freeze it for up to 6 months.

CHICKEN MIX
Recip courtsey of: recipesofacheapkate.blogspot.com
Combine everything in a large pot. Cover and bring to a boil. Then, reduce the heat to a simmer and let it cook for about an hour, until the chicken is cooked. AFter the chicken is done, strain the broth out (you can save it for later uses). Shred up the chicken and mix it together with the carrots. Add about 1/4 cup of the broth, to help the chicken not dry out. Divide into baggies of 2 cups each and freeze for up to 6 months.

Now, my older sister reads my blog. She doesn't comment (but she should!!) but she thought of me as she made Chimi's a few nights ago and she took pictures for me! She rocks.

This meal though, when I saw it, I thought "This would go perfectly with my chicken mix!!" So here we go! 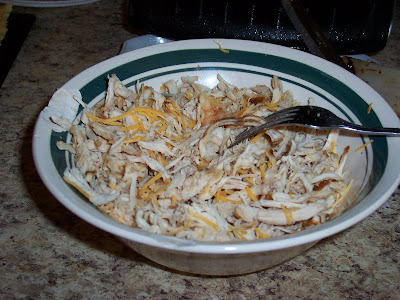 Take 1 bag of your chicken mixture, and mix it together with some sauteed onions and peppers. Feel free to add some cheese. We all know how I feel about cheese. 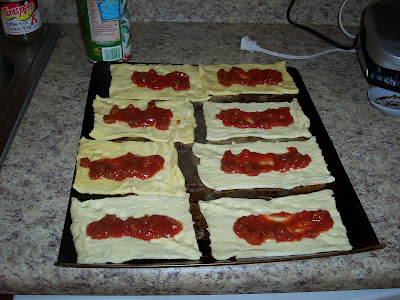 Take 2 packages of crescent rolls and roll them out into rectangles. (2 triangles per square) Make sure you pinch the seams together, otherwise you might have some difficulty cleaning your pan later on. Spoon some salsa onto each one. 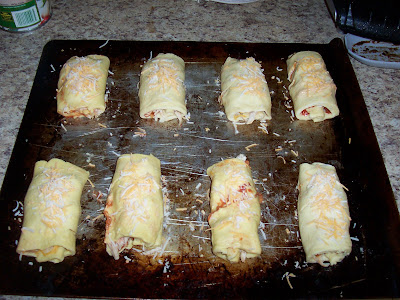 Add some chicken mixture and roll up from the short end. It is more or less just folding the edges up on the rectangles, and pressing the seam into itself (place seam side down on baking sheet). Don't worry too much about the ends, just kind of gently push together a little. Sprinkle with some more cheese (You might have to push it down a little bit to have it stick) 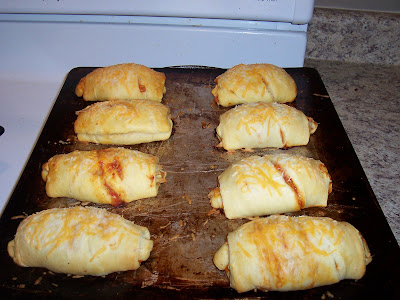 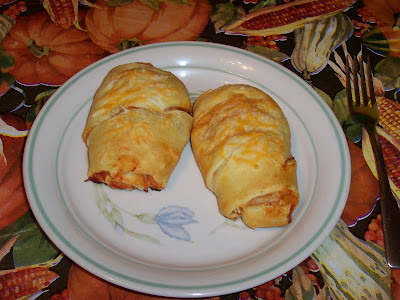 CHIMI'S
Recipe Courtesy of: Recipesofacheapskate.blogspot.com
Heat oil in skillet and cook onion and pepper and shredded meat in skillet. Remove from heat and stir in 1 cup cheese. Unroll crescent rolls, and separate into 8 rectangles (using 2 triangles for each rectangle)- be sure to pinch seams together, or they will leak out later. Spread 1 tablespoon salsa onto each rectangle (stay about a 1/2 inch from edges if you can) Spoon meat and cheese mixture onto the rectangles and roll them up from short end. It is more or less just folding the edges up on the rectangles, and pressing the seam into itself (place seam side down on baking sheet). Don't worry too much about the ends, just kind of gently push together a little. Sprinkle with remaining cheese (I found this to be easier if you kind of pat the top of the chimichangas a little so the cheese will stay on the top and not fall onto the baking sheet). Bake at 350 for about 20 minutes (until golden brown). Top with sour cream and green onions.

And I bet these would freeze well before you cook them too! then just pull out and let defrost and cook as normal.
cooked by Krystal at 7:34 PM